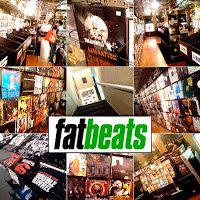 FAT BEATS ANNOUNCES CLOSING OF NEW YORK AND LOS ANGELES RETAIL STORES
I remember years back when they closed the Fat Beats Amsterdam store it was a big mis for hip hop in the Netherlands.
(August 18, 2010 - Brooklyn, NY) After 16 years, Fat Beats has announced the closing of the legendary label's two remaining retail locations in New York and Los Angeles. Fat Beats will celebrate the legacies of the stores, which are scheduled to close in early September (New York: September 4th, Los Angeles: September 18th) by throwing a series of blow-out sales and tribute parties open to the public during their last weeks. Fans can check www.FatBeats.com for updates.

Fat Beats’ longest running and most famed location is at 406 Avenue of the Americas in Manhattan. Since the 1994 opening of Fat Beats' flagship retail location, hip-hop fans have traveled far and wide to visit the iconic store. With locations soon following in Los Angeles (7600 Melrose Ave.), Atlanta, Amsterdam, and Tokyo, the record stores were a place to experience hip-hop culture and its legacy, which became a global phenomenon. “The closing of Fat Beats is just like one of my friends passing away. They promoted vinyl at its highest degree for the culture of good music and that makes it more difficult to say goodbye," says DJ Premier.

The announcement of the closings is a reflection of the woes that have been plaguing the industry for years. Global chain HMV closed their last US location in 2004. Tower Records shuttered in 2006. Last year saw the close of the last Virgin Megastore, and the story is no different in 2010. For Fat Beats, maintaining two stores well into 2010 is a testament to the stores' importance to the music and to fans and consumers continuing to support independent hip-hop.

While news of the stores' closing marks the end of an era, the future is not doom and gloom. Digital sales continue to increase industry-wide; for Fat Beats, currently operating a profitable and growing online retail store, this has provided a boon to business as fans continue to order mp3s, vinyl, and CDs from FatBeats.com. Although digital sales continue to grow, executives at Fat Beats understand the importance of independent retail stores and are planning to re-open a brick and mortar hip-hop lifestyle location sometime in the near future.

The future looks just as bright for Fat Beats Distribution and the label. Fat Beats Distribution, which has been renamed FB Distribution, continues to strike noteworthy distribution deals with independent and major labels worldwide and is now working with different genres of alternative music. Fat Beats Records will continue to release notable albums from their own impressive roster of artists including ILL BILL, TruMaster/KRS-One, Black Milk, Trinity, Sha Stimuli, Q-Unique, and more. Fat Beats owner and President Joe Abajian says, “This is the start of a new era for Fat Beats. We’re adapting to meet the needs of our demographic by revamping and improving our existing systems. While our website, which stocks everything available in our retail stores, continues to do very well, we’re still exploring our options for alternate retail locations in the future. We’re proud of our legacy and will continue to re-invent ourselves. For now, we’ll see you online at FatBeats.com”