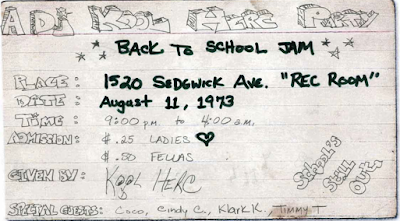 Back in 1973 on the same date, the first house party was held in a small recreation room at 1520 Sedgwick Avenue in The Bronx, New York. Over time, these house parties became more popular, later moving to Cedar Park in the same neighborhood. This house party signified the birth of a movement and a culture, later referred to as Hip Hop. Now, decades later, Sedgwick & Cedar has launched as a clothing brand rooted firmly at this intersection. Thanks to Sedgwick & Cedar, the founders of Hip Hop culture (including DJ Kool Herc and Grand Master Caz) are telling the untold story of that era’s origin: genres that contributed to the music, and to its icons.

As a special gift to online shoppers, all products will be priced at $19.73 to honor this date.

Products available now include a line of graphic tees featuring images from legendary photographer Joe Conzo, iconic images from Jamel Shabazz, tees depicting original party flyers from that era, and its latest line “Planet Rock”: a collection representing the emergence of Hip Hop culture and its movement across the world