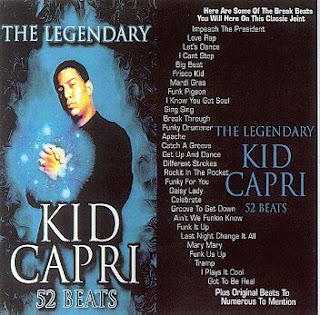 KID CAPRI - 52 BEATS
Tapemasta: Now you know when we can all get together & see the same thing !! That means were all on the same page !! How many people enjoyed rocking this mixtape by Kid Capri. Even his James Brown was considered classic among the masses worldwide..For those that missed out on that joint also, you missed out on some real history..But this one made people realize what Kid was doing & why..Matter of fact, can you imagine rocking a mixtape & don't know what was on the playlist..Those was the days when you just got a mixtape with the date & if you knew the dj - then that was the hottest joint in the street..What i use to do was let the store rock the tape & then i go in..Jamel on the corner of 125th was dropping the hottest tapes, then Stereo Plaza was dropping everybody..Rock & Will was pushing Ron G hard back then..Now to the present - Nobody tried to copy this tape & i don't know why !! Roc Raida did his thing & people realized it when they heard it. Now you know why this tape is considered classic !!