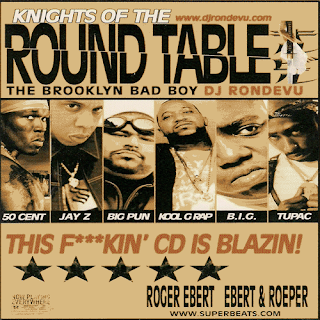 DJ RONDEVU - KNIGHTS OF THE ROUND TABLE PART 1&2
Hevehitta: For this installment of the “Greatest Mixtapes”, I asked Big Chew of Rapmullet [dot] com to contribute to the list. You don’t get one, but TWO mixtapes from Chew! Here is what he had to say:

This is another installment of the “Greatest Mixtapes” as seen previously on sites like thediggersunion.com and classicmixtapes.blogspot.com.

I remember getting an email from DJ Rondevu in early 2004. He basically said, he dig’d Rapmullet and that he had CLASSICS in the stash and that every time he drops it’s a classic. Pretty bold statement and at that time not be familiar with his work you hit ‘em with the “yea right” frame of mind. Rondevu showed and prove tho, sent in a gang of CDs and it was true he had classics. We used to rock the “Hall Of Fame” on Rapmullet back then where classic mixtapes went to shine. Rondevu had numerous joints in the hall and Part 2 was one of the best. Peep the old reviews by Dimez here and here.

Knights of the Round Table as a mixtape series consisted of only a handful of artist but without question 50 Cent was Ronde’s favorite artist. You know there’s a scratch into and you know the blends will be some of the hardest tracks you’ll hear on a skill mixtape. He weaves in some original tracks too, the timing in impeccable, two and three beat blends and the energy is high throughout. Part 1 was near classic and the warm up for Part 2 which should be a part of any mixtape collection.

Rondevu at this time owned his lane. I mean he stepped up and was rocking loose artist based blend concepts before the shit became the norm. He was the trendsetter of that shit. He was the father of that, hands down. He doesn’t get the credit either…but he should. Real mixtape heads know it and really that’s all you can ask for.

Tapemasta: Like crack, we keep comin' back for more !! Rondevu had the game going crazy for a minute..These 2 joints had the hood going straight for the internet & people realize then what mixtapes had to offer..Rondevu was a secret weapon for a certain dj & believe me, i knew way before anybody else knew & i just laughed because i seen what was happening..But Rondevu's signature mixes was always heard & that's what make his joints CLASSIC !!