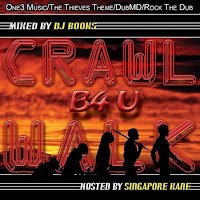 DJ BOOKS - CRAWL B4 U WALK
OneThree Music finally presents the long awaited “Crawl B4 U Walk” digi-mix. The digital mixtape has been months in the making. After the frustration of not hearing home grown emcees in his home city of Boston as well as others in Massachusetts (and further afield), MalMoe decided to gather up a group of emcees and producers to put together a mixtape to showcase them to the world that only hear and see the same people that have made noise for the city.
MalMoe enlisted the legendary DJ Books to mix, the services of his partner and label OneThree Music, artist Singapore Kane as the host. But he didn't stop there, he also knew that when it comes to net mixtapes, Dub MD was the premier presenter with a crazy catalog of released digi-mixes, and the icing on the cake came when he hit up RockTheDub .com for that nail in the coffin approach to releasing the mixtape.With a roster that boasts the lyrical talents of Singapore Kane, Tragic Allies, MaG, Dominique Larue and production from the likes of Purpose, Kid Quest, Hank McCoy and other up and coming emcees/producers, this mixtape will prove that in order to roll with the so called big dogs you've got to Crawl B4 U Walk. Singapore Kane new album "Life On Wax" coming soon!
01. CB4UW Intro
02. Singapore Kane feat. Re-Surch - Crickets
03. ASN feat. Singapore Kane & Ghetto Lion - Run It
04. Purpose - Rising Sun
05. Ripshop feat. Grave Basso & Illin P - Can't Get Close To
06. Re-Surch - Never Fall For A White Girl
07. Dominique Larue - I'm Gone
08. Singapore Kane - My Planet
09. Avid Evade & Double Dose - Bullet
10. Mastapeace - The Grind House
11. Genrokka - Where Did She Go
12. Alchemystics - Bangers 'N' Mash
13. MaG - Aim Higher
14. Singapore Kane - Childish Things
15. Tragic Allies - Raw Energy
16. Casper - Hip Hop Is Not Dead
17. The Closers feat. Singapore Kane & Gab Gacha - Bottom Line
18. Singapore Kane - Dru Hill MC's
19. Singapore Kane - Get Fresh Specialist
20. Ref - Done With 09'
21. Dub MD feat. Laelo Hood, Sic Osyrus, Dominique Larue, Singapore Kane, Junclassic, Mr. Live & Sha Stimuli - 7 Deadly Sins
22. Fatal Mind State - Hoody Rap
23. Singapore Kane - Small Thing To A Giant
24. CB4UW Outro
25. ASN - Crawl B4 U Walk