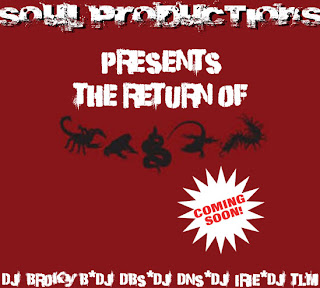 DROPPING SOON PART 1 OF A 3 PART MIXTAPE
Here it is another milestone post #2000. I thought i drop something special for post 2000.
This year we celebrate that my mixtape project started 2 years ago with the first release by my man DJ Books called The Juice Crew Masters Of The Symphony. Now 7 releases later it's time to drop something special for everyone who helped me out with the project & all the fans.
So later this year i'll be dropping a very special mixtape. This mixtape is a remake of the classic mixtape 5 Deadly Venoms by Tony Touch. The mixtape will bring back the 90's mixtape era with real mixing & DJ's
The mixtape will feature some of the best DJ's in game.
Before we drop The Return Of The 5 Deadly Venoms we are releasing 2 mixtapes to get you in the mood for the release later this year.
First to drop is 5 Deadly Dutch Venoms. 5 of the best DJ's from Holland DJ Broky B, DJ DBS, DJ DNS, DJ Irie & DJ TLM will bring you back to the 90's mixtape era & my man Deams will host this mixtape. They each will mixes 20 minutes of 90's classics
The second drop is 5 Deadly Blog Venoms. 5 fellow bloggers will contribute their 10 personal best songs from the 90's & will be mixed by DJ Books from The Thieves Theme & Diggers Union.
More info is coming this week so keep checking the site for more info on this special 3 part mixtape.
Geplaatst door S.O.U.L. op 11:58 AM

ALL THE JEWELS R GREATLY APPRECIATED. JUST GOT MY HANDS ON DJ JUICE VOLUME 45 & 55...STR8 HEAT. CHECK ME OUT OVER AT www.iambloggyfresh.blogspot.com following would b greatly appreciated. @bloggyfresh

MUCH RESPECT & LUV 4 THE HARD WORK U GUYS PUT N. KEEP BLESSING US WITH THE FIYAH. CHECK US OUT @