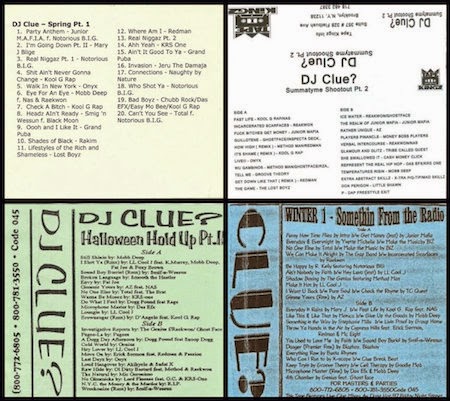 Daniel Isenberg (@StanIpcus) drops another great article a must read.

1995 was a landmark year for New York hip-hop. Wu-Tang Clan released a trio of classic solo albums (Ol’ Dirty Bastard’s Return to the 36 Chambers, Raekwon’s Only Built 4 Cuban Linx…, and GZA’s Liquid Swords), Mobb Deep dropped their magnum opus The Infamous, Biggie and Nas continued their reigns with incredible features, loosies, and remixes, and legendary hometown heroes like KRS-One, Fat Joe, and Kool G Rap all put out stellar solo LPs. And in the midst of it all, DJ Clue was there to usher in the flavor.
Straight out of Queens, DJ Clue—who now holds down an evening slot on Power 105 and is known worldwide for his club and party-rocking talents—made a name for himself back in the ‘90s breaking exclusive records on his mixtapes. In 1995, Clue was heavy on the scene, battling dudes like DJ S&S, DJ Craig G, Doo Wop, Tony Touch, and Ron G for the top mixtape DJ spot in the city. And though his competition was stronger than ever, Clue’s consistency, quality, and uncanny ability to get records no one had yet at a rapid rate made him the guy to beat. He was even nice with the blends. Yup, Clue was definitely putting in work in 1995, dropping hot tapes nonstop.
Twenty years later, let’s take a look and listen back at 10 Classic DJ Clue Mixtapes Released in 1995 for our latest edition of Mixtape Memories, and revisit all the tight tracklists filled with crazy songs he introduced us to—early. Do remember.