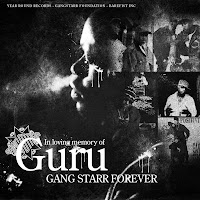 PUBLIC LETTER FROM FROM GURU'S SISTER PATRICIA
The Elam family wishes to thank the fans of our son/brother/father uncle/nephew/cousin Keith aka GURU for the outpouring of love, concern and support. Our hearts are broken by the loss of someone we loved so much. GURU was devoted to his young son, who will most keenly feel his absence.

GURU suffered from multiple myeloma for over a year. Accrued complications from this illness led to respiratory failure and cardiac arrest. As a result, GURU was in a coma from mid February until his death and never regained consciousness. Early on the morning of April 19th, he became hypertensive due to low blood pressure. He again went into cardiac arrest and slipped away from us.

GURU died far too young but he was, and we are, proud of all his many legendary musical contributions.

The family is not aware of any foundations established by GURU. We know and understand that countless fans want to express their condolences and love and, to that end, we are planning a memorial event in the near future that will be all-inclusive. Please look for further details from the family as they become available.

from The Elam Family

Email ThisBlogThis!Share to TwitterShare to FacebookShare to Pinterest
Labels: Guru

So I guess that means the letters that Solar brought forth are total bullshit then? What a messy situation. RIP Guru.